Ready to take control of your finances?
Download your Personal Finance Planner and start planning!
You are here: Home / Money Management / Saving & Investing / The Power of Compounding and Why It Pays To Start Saving Now 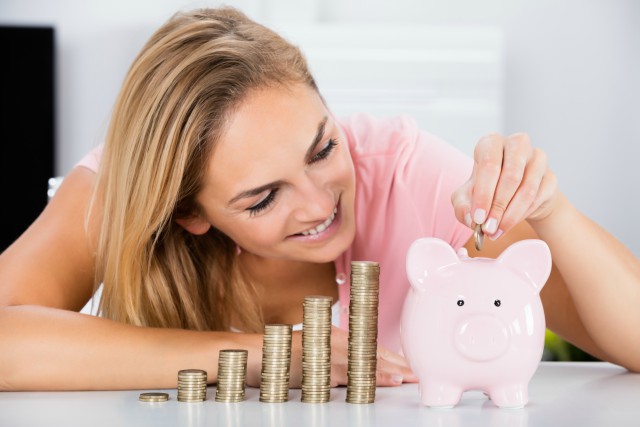 Did you know, the earlier you start to save money, the less it actually costs you? The reason? It’s all in the math… the power of compounding.

You’ve no doubt heard the rule of investment that suggests that the longer you can invest for, the better. But why? What is it about ‘time’ that makes it such a valuable element in securing your financial future?

What is The Power of Compounding?

Compounding. The principle that, as your money begins to grow in value, that growth will begin to earn money on itself. Which will then earn even more money on that additional growth.

And the longer you remain invested, the more valuable this compounding becomes.

How Interest Rates Adds Up

Let’s consider that you have £10,000 and you find a lovely plan that earns your money a very attractive 4% per year. So you take the plunge.

You could, of course, withdraw that £400 and spend it. But what if you don’t? What if you leave it where it is?

In other words, it’s money for doing absolutely nothing – simply for leaving your previous year’s income where it was. This astounding outcome is completely due to the power of compounding.

This can really add up.

Let’s jump forward a bit and look at the situation after ten years. Using that £10,000 example and 4% a year, if you had left the money untouched, you would now have a grand total of £14,802 – your £10,000 original investment, £4,000 of interest paid on that original investment and a clear £802 of interest earned by the interest.

Sounds good, but are you really impressed yet? Well, this is only ten years. Perhaps we should jump forward again and take a look at the situation after 20 years.

But the interest earned on the interest now totals £3,910, a full £3,108 of which was earned only because you left the money untouched for that second decade.

Well, the point of this is to show why starting saving in your 20s and 30s is so powerful, as opposed to leaving it to your late 40s or even 50s. Because at 30 years, that’s when the value and the power of compounding really begins to show.

Which equates to almost a third of the value and half your total growth. (We won’t go on to 40 years – but as you can probably imagine, it gets even better!)

The reason all this matters is because the principle can be used to save you money. Reverse the above thought process for a second and let’s consider you have a target figure in mind – retirement, say.

In fact, there is a rule of thumb that suggests that, for every ten years you delay starting saving, you will need to put away double the amount each month to achieve the same outcome.

Retirement is one of the most expensive things you will face. Like buying a house, anything that can be done to reduce the burden on your finances should be done. Which is why you are constantly told to start saving early in life. And even small amounts can make a difference.

So make it your New Year’s resolution to uncover as much spare money as you can. Even just your spare change. And save it. What about you? Are you saving? If not, what is your reason for not saving?

Why not join us so you do not miss any post in this series to learn more on a subject that has a much better performance yield than the lottery? Here is the first post in the investing series.

Please note: the 4% example above is an example for illustrative purposes only. The value of investments can go up as well as down and future returns are not guaranteed.

MoneyNuggets is a personal finance blog for women. Our goal is to empower women through financial education. Connect with us on Twitter or Facebook.

Ready to achieve your financial goals?

MoneyNuggets is a personal finance blog for women. Our goal is to empower women through financial education. Connect with us on Twitter or Facebook.

This site uses Akismet to reduce spam. Learn how your comment data is processed.

FREE Get Out of Debt Challenge